The Best Plumbing Fittings tested... You might be surprised! - Around the House® Home Improvement: Expert Advice for your Home

We discuss the new testing that our friend Roger Wakefield , the Expert Plumber did on many of the new plumbing fittings you see out there. You might be surprised at the results. Plus we talk about electrical and some current recalls.

If you want to buy Eric G a beer or coffee you can support the show here: https://www.buymeacoffee.com/ATHERICG

[00:00:17] Intro: remodeling and renovating your home, there is a lot to know the We got you covered.

[00:00:55] Eric Goranson: All right, well, today I wanted to talk about what are the best [00:01:00] plumbing fittings. And you know, I have made it no secret that I'm not a fan of the shark bite fittings. I've played with them. I've tested them. I've seen them fail. And my buddy Roger Wakefield did his own testing here and it's a great video.

[00:01:45] Eric Goranson: I had one house where this connection from the new to the old failed plumber had done it. It was correctly installed, and it flooded the entire basement causing hundreds of thousands of dollars of damage just in one. [00:02:00] Now the testing that, that Roger did, Roger, Roger Wakefield the expert plumber. This was all done on copper.

[00:02:27] Eric Goranson: Hydrostatic meaning how much pressure, psi and tensile strength, how much pull strength before it comes apart. So on the hydrostatic test, let's, let's put this this way. The best way to connect copper is still gonna be raising or soldering. That is the strongest way to do it, period. Because they used that for those tests and it didn't come apart.

[00:03:25] Eric Goranson: This isn't like a pack, but it's a crimp fitting. So you put two pieces of copper together. There's a connector that has a little piece, and it crimps or crimps around that and connects copper to copper that way. That failed at 1,504 to 1,643. The quick fitting. Failed at 2,127 psi, and that's 21 times about your city water pressure.

[00:04:29] Eric Goranson: Now, let's be very clear, this is on brand new copper installed. Exactly. Perfect. In a brand new situation. So this is a best case scenario and by no means what you're gonna see out in the field because, you know, there's many things that happen when you're out in the field. You know, plastic pipe, cpvc, It's gonna fail, I'm sure, in a lot less than what that is.

[00:05:24] Eric Goranson: So I was really somewhat surprised to see that this quick fitting that looks similar to a shark bite, but just a, a seemingly higher quality fitting. Is outperforming the press fit because the press fit has been known out there as the be all end all way to attach copper without having to worry about, you know, it coming apart.

[00:06:14] Eric Goranson: And I could make an argument that, uh, corrosion might actually hold it together better versus with the plastic and the O ring that could weaken it. So the press fit, I think, actually potentially could get stronger down the road. As the shark bite gets weaker. So really I'm, I'm kind of surprised that the quick fit is, um, something that I'm gonna take a little bit more look at.

[00:06:55] Eric Goranson: I understand that. Uh, you're out there selling that and you've got a new line of products coming out as [00:07:00] well, and maybe that's exactly why. But, uh, I've just seen too many failures and I've tested them. I personally, on my projects, have not had any failures, and I really like using them for temporary shutoffs or doing a, a temporary patch until I can get in to fix it.

[00:07:33] Eric Goranson: All right, now let's talk about some recalls that come out. It's been a little bit since we've done that. Uh, Hunter fan recalls lighting products due to shock hazard. The internal wires and the lights can be damaged opposing an electrical shock hazard due to the consumer. Take a look over@cpsc.gov.

[00:08:13] Eric Goranson: Posing finger amputation and crushing hazards. Ouch. Consumers should immediately stop using the recalled portable generation unless locking pin has been inserted to secure the handle in place before and after moving the generator. Contact Generac for a free repair kit consisting of a set of spacers to move the handle away from the frame, eliminating the pinch point.

[00:09:08] Eric Goranson: Um, man, there's not a lot of these, so the chance that you have one's like the lottery, there's about 150 in 'em out there, so something else to consider. And that's some of the big ones here for right now. Uh, these are always something that we're trying to keep an eye on, and there's one more that I forgot to mention.

[00:09:42] Eric Goranson: The diagnostic software updates are designed to monitor the recall battery cells and shut down the battery of a fire risk is detected. If the battery shuts down, please contact LG Energy Solution, Michigan for further instructions. Do not attempt after that to turn the battery back on again. You don't want to have a runaway battery fire.

[00:10:22] Eric Goranson: We're gonna talk about fires inside your home and more importantly, Some of the problems that we're seeing out there with new materials in your home, that can be a problem. And you know what one of 'em is? I'm gonna give you a secret. The new drywall out there that we're seeing that's in all your home improvement stores and drywall supply places, there is a huge issue with this.

[00:11:10] Eric Goranson: I don't wanna see this happen, but I tell you what, uh, they've found some shocking new information that we need to talk about and, uh, this could save some lives out there, so you won't wanna miss that show on Saturday. And then an hour number one, we're gonna talk about what's a project cost? You're gonna hire a contractor out there.

[00:11:45] Eric Goranson: So, uh, we'll talk about kitchen and bath, we'll talk about both of those. We'll talk about roofing, windows, siding, decking. What are these projects gonna cost if you're gonna hire, and what's the best way to go about that? All [00:12:00] coming up on. Now I wanted to jump out and put out a buyer. Beware to everybody right now, and I'm seeing more and more of this, of questions that are coming into me, and it's something I want you to be very careful with.

[00:12:33] Eric Goranson: So it doesn't matter if you're upgrading service or you're just changing out a panel. Let me give you some tips and tricks here to make sure you're going okay with this. Because I tell you what, I have seen some crazy stuff coming up on the internet with questions that I wanna make sure that, uh, I've got you as you helped here with this, because I don't wanna see you get burned.

[00:13:26] Eric Goranson: Sometimes that has to move or you have to move where the, where the power's coming into the house, depending on building code. So I just wanna make sure that you realize that a panel change out there by a licensed bonded electrician can be anywhere from a couple grand at the cheapest. It's four or five grand out there, depending on what has to happen.

[00:14:13] Eric Goranson: Now it didn't. So they're like, Okay, since you're doing the new panel, that's gonna get upgraded. So we had to do that, which isn't a big deal. It's, I like it better. It's not going through the middle of my trees. It's in a better location, except that it. The old one was on the side of the house and now it's closer to my front door, which I'm not happy about, but that's the way code works.

[00:14:50] Eric Goranson: They know what they're doing. They come in, get quotes, get three or four quote. These are all things that I want you to do. Uh, I was just talking to a buddy yesterday who's getting a, [00:15:00] uh, a generator system put in a backup generator, one of the automatic ones because, uh, he works in the media and needs to have that for his home and studios.

[00:15:36] Eric Goranson: And that, uh, you know, project led to a house fire, you're gonna be in a little bit of trouble. And we don't wanna see that because, you know, insurance companies, many of them like to, uh, figure out a way to not have to pay you. All right, everybody. Have a great rest of the week. Happy midweek. Special. I gotta get off to more interviews and a meeting. 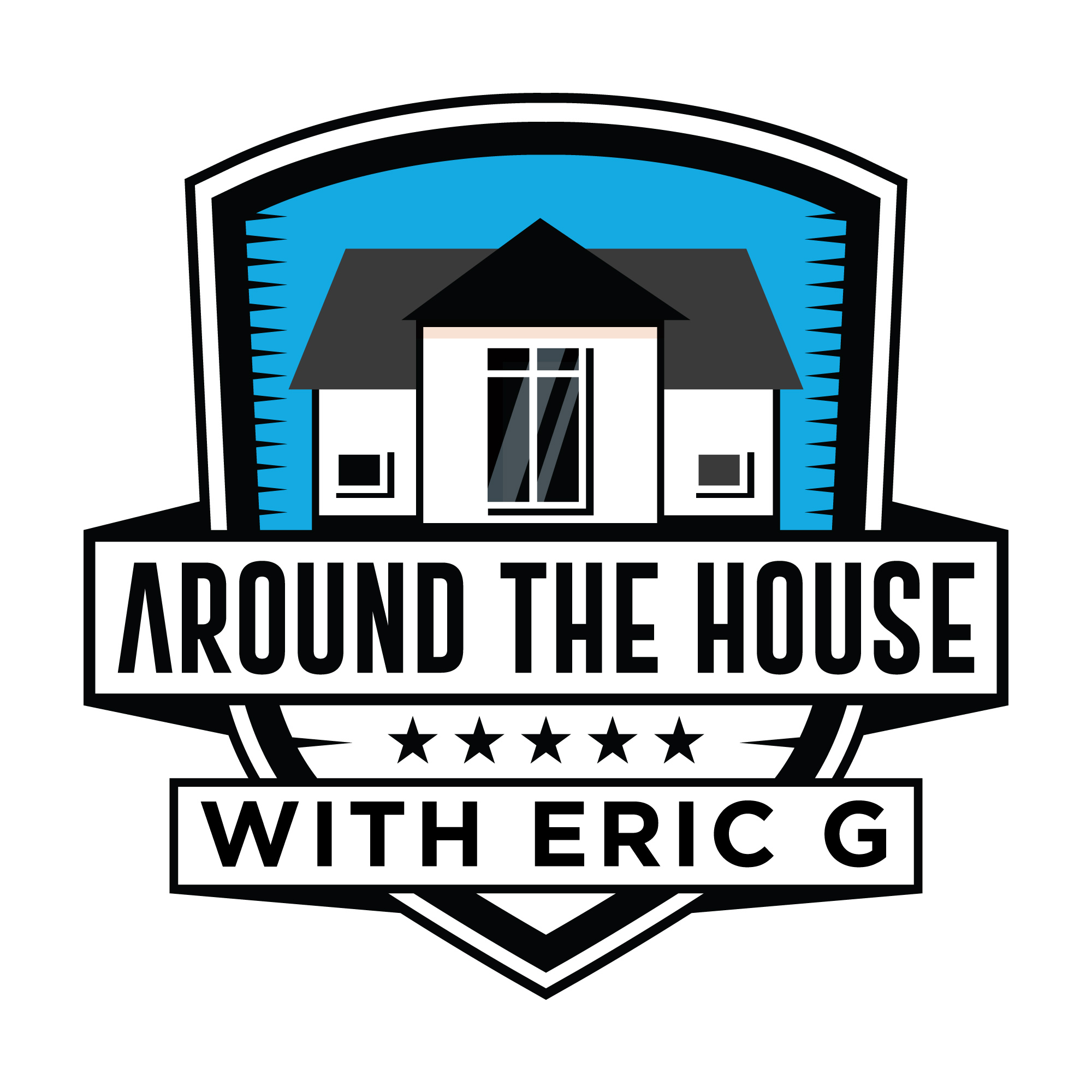 Around the House® Home Improvement: Expert Advice for your Home
Help for your remodeling, renovation, healthy home, interior design, and home improvement project for your kitchen, bathroom, and house!